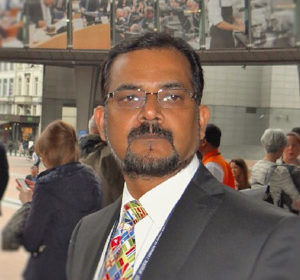 Dr. Ravi P. Singh is the 4th Secretary General of Quality Council of India an independent organization under Department of Industrial Policy and Promotion, Government of India. He heads the organization which has the mandate to improve the quality of products, processes and services in sectors like education, healthcare, skills training, manufacturing etc.
Prior to being appointed as Secretary General by the Government of India, Dr. Singh served IGNOU as the Director of Regional Services Division and then as the Senior Regional Director in Delhi. Dr. Singh was formerly the founder Vice Chancellor of Sharda University at Greater Noida. He joined this position on leave from Punjab Technical University where he continued as Dean from 2003-2009.
Dr. Singh started his career as an Assistant Director in All India Council for Technical Education in 1996 and continued as Deputy Director till 2003. He held various important positions like Regional Officer of the Northern Regional Office at Kanpur during 1996-1999 and later as the regional Officer of Eastern Regional Office at Kolkata during 2000-2001. He has been an academic administrator since 1996 and has made exceptional contributions in policy planning, accreditation, use of ICT in classroom learning, flexible credit based system implementation, research and development.
Ever since joining QCI, Dr. Singh has initiated various innovative schemes and projects for quality intervention at grassroots level. Under his leadership, QCI is presently involved in Zero Defect, Zero Effect Maturity Model implementation in manufacturing as well as Competence Certification of Yoga Professionals around the world. Dr. Singh is known for his frank ideas and writes regularly in magazines and journals. He sits on various Boards and Committees in Government as well as Industry and travels extensively in India and abroad. Born in Varanasi, Dr. Singh completed his Bachelors and Masters in Physics from Banaras Hindu University. He was the Gold Medal winner at Masters level in Physics and pursued his Ph.D and Post-doctoral work in Condensed Matter from University of Western Ontario, Canada during 1989-1995.