Ajay Kaul – a Food and beverage (F&B) industry veteran – works with Everstone Group as Senior Director and leads the QSR business of its food platform F&B Asia that owns and operates several marquee brands such as Burger King (India and Indonesia), and Domino’s (Indonesia). Also under the platform’s umbrella are brands such as Masala Library, Farzi Café, Pa Pa Ya, Masala Bar, Harry’s, Pind Balluchi, and Duck & Rice. He also serves as Executive Chairman on the boards of F&B Asia’s investments in Indonesia.

Ajay, who joined Jubilant Foodworks in 2005 as its CEO, took Domino’s in India to become the largest market for Domino’s outside of the US. It is the largest QSR brand in India for the past few years. He was also instrumental in launching Dunkin’ Donuts in India.

Ajay holds a Bachelor’s degree in technology from Indian Institute of Technology (IIT), Delhi and a Masters’ degree in business administration from XLRI, Jamshedpur. Ajay has nearly 28 years of overall work experience in industries such as financial services, airlines, express distribution and logistics and food retail. Prior to Jubilant, he worked in Indonesia as the Country Head of TNT Express Division. He also worked with TNT India, Modiluft and American Express TRS.

Ajay is an accomplished singer and a golfer. 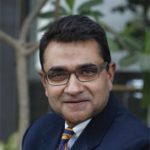