Damodar Mall is an Indian retail sector professional. He is the Ex – Director, Integrated Food Strategy at Future Group and was part of the core strategy team. In Future Group he was involved in shaping Big Bazar, Food Bazar to scale and creation of the backend value chain for the food business. He also led the creation of retail concepts like Foodhall, KB’s Fair Price, Ethnicity and several private brands at the Group.

A business graduate from IIM, Bangalore and an engineer from IIT, Mumbai, his earlier career was at Hindustan Unilever in the brand management function. He promoted a supermarket chain in 1999-2000. The venture went on to become a 60 store D Mart chain in weatern India. He headed the first phone order supermarket, Sangam Direct for Unilever in 2003.

He is the author of Supermarket Wala – Secrets to Winning Consumer India which was launched in September 2014 at the India Retail Forum 2014.The book talks about observations and experiences in the retail sector and provides valuable insights. He continues to write for various publications from time to time.

He was a member of Coca Cola Retail Research Committee of Asia from 2006 to 2009. He is the recipient of the Golden Spoon Award for the most admired Foog & Grocery Professional of the year 2011. 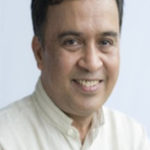