Navneet Kapoor is the President, Managing Director, and Chairman of the Board, for Target India, a fully owned subsidiary of Target Corporation (NYSE: TGT). Target is a Minneapolis-based discount retailer with more than $70 billion in annual revenue, which serves guests at more than 1,804 stores in the United States.
Navneet was named to his current position in 2012, after being with Target in a variety of leadership roles since 2006. In his current role, Navneet has responsibility for all aspects – strategic and operational – of Target India, and leads an organization of over 2,800 talented team members focused on all key functional areas associated with retail: technology, e-commerce, analytics and reporting, merchandising, marketing, finance, among others. He is deeply engaged with Target’s digital transformation and has been championing Target’s partnership with the startup ecosystem in India through the Target Accelerator Program.
Prior to joining Target, Navneet spent about 10 years with GE in New York – USA, Bangkok – Thailand, Tokyo – Japan and Gurgaon – India, in a variety of roles spanning research & development, operations & quality, and marketing. Most recently before Target, he served as Vice President – Marketing for GE’s Commercial Finance business in Asia.
Navneet is actively engaged with NASSCOM and other advisory bodies to accelerate the maturation of Global In-House Centers (GICs). He is currently the co-chair of NASSCOM GIC National Council. He is also passionate about strengthening the product ecosystem in India and finding new ways to further the industry’s engagement with startups. A regular at conferences and industry forums, Navneet often shares his learnings on topics ranging from digital disruption and global leadership to innovation and diversity.
He received his Ph.D. (Chemical Engineering) and M.S. (Electrical Engineering) degrees from the University of Minnesota, USA, an MBA from the University of Chicago, USA and a Bachelors degree in Chemical Engineering from IIT Kanpur, India. He has several patents to his name and has published numerous research articles in various refereed journals like IEEE.
Navneet is married and lives in Bangalore with his wife and two sons. When not at work, he enjoys sports, movies, theatre and traveling. 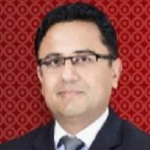