A BBA from Adelphi University, Garden City, NY, Rohan Vaziralli joined Estee Lauder in 1996 as a production supervisor from where he went on to direct production & engineering as also manufacturing operations. He has also served a stint as business development manager for the company in Dubai.. In 2005, he donned the mantle of country manager, ELCA Cosmetics, India, a subsidiary of Estee Lauder Companies He is responsible for Estee Lauder, MAC, Clinique, and Aramis & Designer fragrances brands in India. 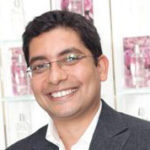