If you ask Vikram, he will tell you that he is an accidentalentrepreneur, that is how he likes to keep everything too, underplayedand simple. But for the rest of the folks at Enrich Salons andAcademy, a company he founded along with two friends in 1997, it’sproven to be one happy accident!

For three quarters of his almost two decade long working life, Vikramhas worn two hats. Starting work even while he was an undergraduate, andeven after his post graduate management education, his day job was asa finance professional. Post work and weekends were devoted to thisretail venture. And that worked very well, too, as the dominant portionof the salon business happens on weekends.

Not only did this make him an expert at multi-tasking, it also ensuredEnrich got the best of both worlds – the nimbleness of a smallenterprise with the systems, and processes that you would find in thevery best MNCs. A lot of the processes that Enrich is known for havetheir roots in the exposure he received during this time in his dayjob. And that is also why Vikram is equally at ease, discussingnumbers/ scaling up plans with merchant bankers as well as the styles of theseason with hair stylists.

A potent combination of right and left brain thinking, Vikram is oneof few business leaders that combine financial acumen with peopleskills required to manage the human resource function, the two broadareas he overseas at Enrich besides the key portfolios of Strategy andGrowth.

Focused and highly energetic, he is someone who loves the big pictureas much as the tiniest of details – after spending hours articulatingconcepts in a presentation deck, he can then spend almost the sametime formatting the layouts.

The last few years Vikram has largely devoted to empowering Enrich andstill, he makes time to help his wide group of friends and colleaguesstart their own ventures or manage them better, go for off-siteseven with his ex-company teams and for holidays with his school andcollege mates.

Vikram is married to Tejal, who was also a part of the early days at Enrich. She has been a big part of his ability to pulloff so much. The duo have two school-going children and live in Mumbai. 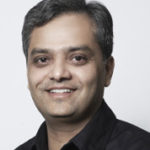