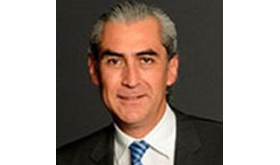 Javier has been with Cinépolis for 14 years and has worked in Mexico, Central America and India. He was part of the initial team of Cinépolis India and has been part of the Board of Directors since its inception in 2007.

As of today, Cinépolis India operates 275 screens in 65 cinemas. It has footprints in 42 cities spread across 20 states.

He was in charge of the first international expansion of the company to Central America in 2002 and has occupied various positions at a global level like Marketing, Supply Chain and Business Development. He created and led Cinépolis low-budget cinema concept in Mexico, which accounts for more than 300 screens, so far.

He is married with three children. His interests include long distance running, reading and traveling.